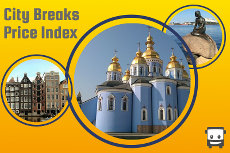 For our city breaks ranking, we took into consideration a wide range of data in order to come up with a ranking as close to an actual traveller’s reality as possible. Breakfast is had in the hotel and the trip to the city centre and back is covered by two single bus tickets. For lunch, we thought of a cheapish and quick option, which is why the local price of a meal at McDonald’s was used. A take-away cappuccino serves as an afternoon pick-me-up. Since the average tourist also wants to see and experience things, the entrance fee for the respective city’s Top 2 sights and attractions according to Tripadvisor was taken into account. We even used the data if the attractions were free of charge. This way, a city like London, where many popular museums don’t cost extra, could get some well-deserved bonus points and the average price per day dropped. In addition, we used average prices for a night in a double room in a 3-star hotel, a cheapish dinner as well as local beer prices. Below you’ll find a more detailed look at these three categories.

Hotel Price Index: This is how much you’ll have to spend on one night in a double room

Mostly, the prices for one night in a hotel are in correspondence with the overall ranking. With prices between £30.50 and £206.40, the difference is quite significant, though.

Dinner Price Index: This is how much you’ll have to pay for dinner in an average restaurant

Eating out doesn’t have to be expensive. In Prague, Sarajevo, Bratislava or Warsaw – although rather mid-table in the overall ranking – an average meal is only about £5.

Beer Price Index: This is how much a pint of beer will cost you

With less than 50p for a pint, Kiev is the undisputed number one when it comes to beer prices. In Lisbon, Bratislava and Moscow, however, the cold refreshment is also surprisingly affordable.