Looking for Pokémon is a lot of fun but it can also be quite frustrating once you’ve reached a certain level in Pokemon Go. The common Drowzee or Rattata does not tickle your fancy anymore and you don’t even care wasting a pokéball? And even fairly rare Pokémon promising exciting evolutions are already registered in your Pokédex? Then it seems like you have to put a bit more research into your search in order to find the very specific Pokémon you’re still missing. A good place to start are nests, where rare Pokémon spawn. We fill you in on the top 10 Pokémon nests in the UK.

A word of advice: In order to make the game more exciting, spawns and nests change from time to time. For instance, it is argued that the last update has transformed many Charmander nests into places for Bulbasaurs to spawn. If you know of any recent changes or have advice on more rare nests, you can tell us – and the other players – in the comments. 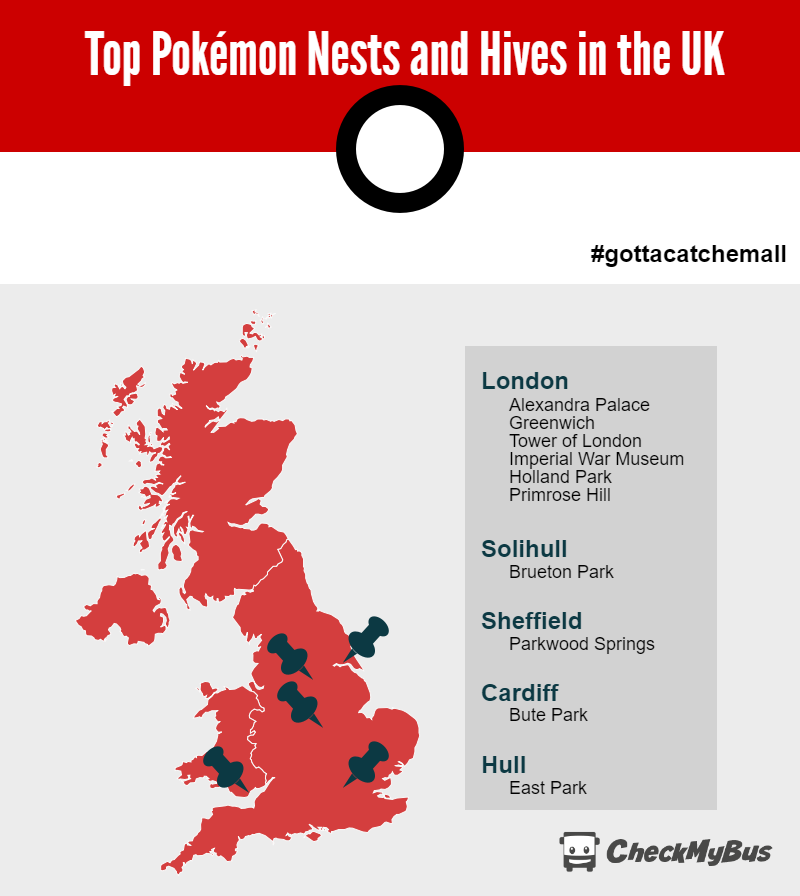 The Queen’s crown jewels have always been well protected. This time it’s a rare Dragonite taking good care of them. There have been rumours that the Dragonites at the Tower spawn in the early morning hours and that they can actually be found more often in the inner part of the Tower. Thinking about paying the entrance fee to get your personal Dragonite? We believe the money won’t go to waste since you can use your stay at the Tower to learn a bit more about British history as well.

While the Imperial War Museum used to be in the hands of Dratinis, the latest update seems to have transformed the spawn into an Eevee one. This is good news for many London based trainers. While Dratini has only two forms of evolution, Eevee actually has three (original forms excluded). So if you catch enough of the furry monsters, you can welcome a total of four new Pokémon to your collection.

One of the starter Pokémon seems to spawn fairly regularly at Brueton Park in Solihull. If you’re new to the game that’s important to know: As a Solihull trainer, you should rather pick Squirtle or Charmander as your first Pokémon and then make your way to Brueton Park to catch a wild Bulbasaur. This way it’s easier to complete your Pokédex.

In the 19th century, Sheffield was one of the UK’s most important centres of steel production. And what do you need to produce steel? – Fire! No wonder that the fire-type Pokémon Magmar feels so at home there and regularly spawns at Parkwood Springs.

According to Twitter and Reddit users, Bute Park in Cardiff is filled with Pikachus. Although the little yellow Pokémon can be hatched from 2km eggs as well, it is still a very popular one to have because it’s the main Pokémon of the TV show’s hero Ash Ketchum. Also think about this: You only need to catch 13 Pikachus to evolve them into a Raichu.

Rumour has it that Hull’s East Park currently acts as a Doduo hive. So if you haven’t already registered one of the two-headed bird Pokémon in your Pokédex, you should make your way down to the park quickly. After all, who knows what the next update might bring? You might get a Pidgey nest…

Ally Pally is one of the UK’s most well-known spots to catch Pokémon. It has become particularly famous for its regular spawns of Squirtles – both before and after the update, which shows that not every nest is now inhabited by another type of Pokémon. Even if you have enough of them and have managed to make them evolve into a Blastoise, you should take a trip up to the Alexandra Palace. Reddit users have reported of Aerodactyls, Dragonites, Clefairys and an unusually high amount of Eevees.

Holland Park in the west of London is a good place to catch Pokémon, especially so if you’re on the hunt for a Bulbasaur. The plant-type Pokémon seems to be very at home in Holland Park and rumour has it that there’s plenty of other creatures hanging around that area as well.

Primore Hill is good for a walk, for picnics and for watching the fireworks at Guy Fawkes’s Night. However, lately it’s also one of London’s hotspots for catching Pokémon. With a regular spawn of Cubones, you should take a trip up to Primrose Hill, if you haven’t already registered this small but feisty Pokémon in your Pokédex.

According to online gossip, the small but very powerful psychic Pokémon Abra frequently appears in Greenwich Park. In general, Greenwich Park seems to be the place to be to catch Pokémon in London with appearances made by Dragonites and Vaporeons. Once you’re finished in the park, you can also make your way to the O2, where lure parties are held every now and then.

What about Scotland and Northern Ireland?
Hope our little guide helps you catch some of those rare Pokémon you’ve been missing so far. Also: We’re sorry for everyone from Scotland and Northern Ireland. Even after endless hours of research, we were not able to confirm any noteworthy nest up north. If you have spotted some good ones or heard rumours about interesting hives and nests, tell us in the comments!

Update:
Speaking of insider tips, Giles just reported a “mad nest” of Charmanders at “Hazelbank Park” in Belfast. Thanks, Giles!

And some Squirtles have been spotted beside the Titanic Belfast! Thanks for the tip, Jonny!

Add Selly Oak Park in Birmingham to the list, which, as Matt reports, “is an active Pinsir nest”! Thanks, Matt!

In the meantime, you can get the coach to reach one of the nests on our list. A ticket from Glasgow to London, for instance can be booked starting from £10. You might even catch some on the bus. Pro Tip: Check for a bus company offering free WiFi on the coach. 😉