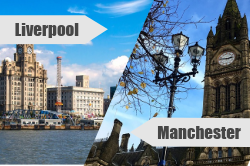 The winter months can be rather grim for many people throughout the UK with limited hours of daylight, cold temperatures, gray skies and no shortage of rain. While it may be tempting to just stay at home until the season passes, going on a trip can help ease those winter blues. Of course, Manchester and Liverpool might not be renowned for their sunny winters, but both cities offer plenty of museums, free activities, history, culture and music to keep your mind off the weather.

Travelling Between Manchester and Liverpool

Approximately an hour’s coach ride apart, Manchester and Liverpool are easily accessible from one another with frequent connections from National Express and megabus UK.

Bus from Manchester to Liverpool, National Express, from £2.00 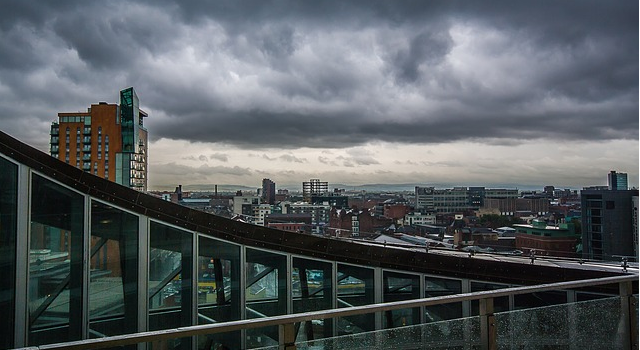 Get Active in Manchester

As one of the largest cities in the UK, Manchester is a bustling urban area with plenty to offer visitors and locals alike. Prices are generally cheaper than London, and there are many free activities to choose from, a huge bonus for those who’ve dwindled their savings over holiday shopping. Music lovers can keep up with the newest trends at the Band on the Wall event, while restless feet can find their rhythm at Revolución de Cuba’s weekly salsa classes. The city’s BFI Mediatheque even offers a modern library with over 2,000 British films and series of various genres for visitors to enjoy.

Those wanting to see the city’s cultural side will have plenty of options to choose from, including the People’s History Museum which showcases Manchester’s pivotal role in the Industrial Revolution, and Women’s Suffrage. The Manchester Art Gallery offers numerous exhibitions, including an extensive collection of garments throughout the centuries, and the Whitworth Art Gallery houses some of Andy Warhol’s famous works. Accessible by tram is the MediaCity, the home of the BBC, which offers tours of its studios and an inside look at the television and radio industries. Of course, no list of Manchester sights would be complete without the National Football Museum, the largest of its kind in the world.

Manchester offers plenty of indoor options to help keep active when the weather is less than ideal. If you’re looking for a real winter experience, the Chill Factore houses indoor slopes for skiing and snowboarding and welcomes both participants and spectators. Those looking to forget the season can check out the indoor trampoline park, Jump Nation, which has over a hundred trampolines that adults and kids can enjoy. All Star Lanes offers quality bowling lanes with a retro American flair, including a cocktail bar and classic diner food. 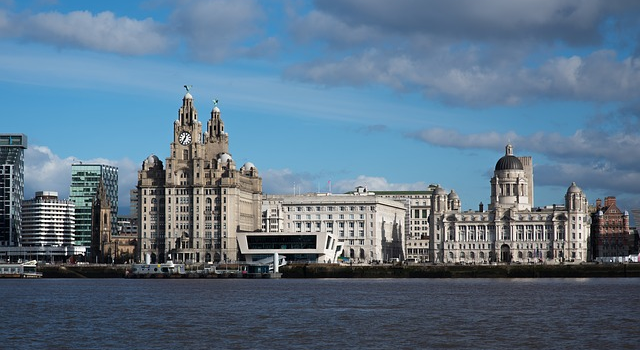 Enjoy a Night Out in Liverpool

World renowned as the home of the Beatles, Liverpool is a fascinating city to explore that offers plenty to keep your mind off the cold. The city is a mecca for musical enthusiasts of all kinds with plenty of venues and sights to enjoy from the Liverpool Philharmonic to shows featuring American folk music and of course, the aforementioned Beatles, with replicas of the places they originally played at, such as the Cavern Club.

Liverpool has a thriving culinary scene and offers a distinct list of options for a night out. Try the city’s signature Liverpool stew at Scouse or Bubble and Squeak. The Restaurant Fraiche is the perfect option for people looking for fine dining, and a score of other restaurants can be found along Hope and Bold Street by the city centre. The Alma de Cuba is particularly impressive as a converted church. As far as bars go, the sky is the limit with quaint old pubs lining the Georgian Quarter, such as The Belvedere and Peter Kavanaghs, or the Pilgrim Cellar on Pilgrim Street which attracts plenty of local students.

A UNESCO World Heritage Site, Liverpool has a sizable collection of Grade 1 listed buildings as well as the largest Cathedral in Britain. Pierhead, the riverside near the Royal Liver Building, is one of the most famous in the world and is also considered a World Heritage Site. The area offers plenty of places to spend a day indoors, with shops, museums, art galleries and pubs nearby. The Museum of Liverpool is one of the UK’s biggest museums and has over 10,000 years of history, while the World Museum takes visitors around the planet and beyond with exhibits on ancient Egypt, dinosaur skeletons and Mars. The city’s art scene is difficult to rival with numerous theatres, including the impressive Bluecoat Theatre, specialising in contemporary arts and the Everyman Theatre, which has been open since the 60s.