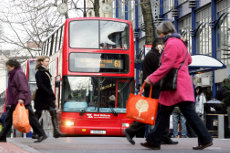 There’s a lot of things going on in the world of buses and coaches. While the launch of a new bus connection, attractive deals or the achievements of individual coach companies count amongst the more normal pieces of information, from time to time a more bizarre one pops up. We have collected the most ludicrous news of the UK bus and coach industries from the last few months.

A family was on their way home from holidays on the Isle of Wight when their coach stopped at a motorway service station near Oxford. The dad decided to take a photo in front of the National Express vehicle. When he uploaded it to his pc at home, he noticed a weird presence behind him on the coach. Dark eyes and a large head made him immediately think of an alien: “It looks like an alien is photo-bombing me.” Afterwards the traveller got in contact with the coach operator, who could not explain the eerie encounter either, especially since all passengers and the bus driver had left the coach. While the passengers wife was not particularly frightened by the photo, the traveller himself claimed that he was “creeped out” by the encounter and did not set foot on a coach ever since.

In May 2015, the Cardiff Bay based bus company New Adventure Travel has launched a new marketing campaign which caused a massive online uproar. The new buses on the X1 service from Culverhouse Cross to Pontprennan featured a seemingly naked woman (or man) holding a sign reading “Ride me all day for £3”. Many customers afterwards complained on social media and accused the bus company of blatant sexism. In the end, NAT gave in to the customer complaints and had the ads taken off the vehicles within 24 hours.

It is common knowledge that foxes got the hang of urban life a while ago and while spotting a fox in London is nothing out of the ordinary anymore, sitting next to one on a London double decker bus is still a bit unusual. This is exactly what happened to passengers riding the No. 12 bus from Elephant and Castle to Oxford a few weeks ago. A passenger posted about the weird encounter on Twitter, claiming: “That stuff about urban foxes adapting to city life is clearly nonsense. This one didn’t even have his Oyster card.” In the end, the fox simply got off the bus at the Imperial War Museum. One might wonder whether George Orwell’s “Animal Farm” was more than just fiction after all.