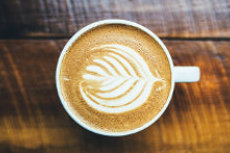 After waking up in the morning, many of us turn to a warm cup of coffee to overcome our grogginess and take on the day. It’s a part of many people’s morning routines, but in a few years’ time, it may be that buses get their morning coffee as well. Bio-bean, a British startup, has teamed up with Shell Corporation and Argent Energy to work on a biofuel alternative for London’s buses, and the key ingredient: used coffee grounds. The company aims to produce 6000 litres of the fuel, which would be enough to power one bus for an entire year.

Unlocking the Power of Coffee

Founded back in 2013, bio-bean’s primary focus is utilising used coffee grounds, which would otherwise build up in landfills to produce harmful Co2 emissions. However, the focus isn’t solely on biofuel. The start-up also produces “coffee logs,” for use in stoves and fireplaces as a more eco-friendly alternative to traditional wooden logs. In fact, the logs themselves are even more flammable. Bio-bean is funded by private investors, the Shell Corporation as well as the UK government.

A New Approach to Biofuels

Bio-bean operates by collecting coffee grounds from various establishments, including restaurants and cafes, and then transports them to the company’s factory. Here, the grounds are dried up so that coffee oil can easily be extracted and then mixed with various fuels to create the final concoction: B20 biofuel. But why coffee oil? According to the company’s website, “Spent coffee grounds are highly calorific and contain valuable compounds, making them an ideal feedstock from which to produce clean fuels.”

Bio-bean receives a lot of support in its endeavors as well. The company has already partnered with scores of coffee shops all over the UK, including large chains such as Café Nero and Costa, to collect the grounds. It is estimated that the United Kingdom produces around 500,000 tonnes of coffee grounds every year, and that the city of London alone is accountable for 200,000 tonnes. Needless to say, bio-bean sees this problematic waste as an opportunity for sustainable energy.

Making an Impact for Britain and the World

Moving towards biofuels for a more eco-friendly energy source is nothing new for London’s buses. Transport for London has reported that it has been converting to biofuels to help cut down the city’s emissions, recently testing a fuel made with cooking oil. The switch to more sustainable biofuels has a myriad of benefits, including reducing Co2 emissions by approximately 10 to 15% compared to conventional diesel, providing a renewable alternative to finite fossil fuels, and a proven record of high quality engine performance, especially during cold weather.

Many of London’s buses are already using biofuels from other waste products, but never before has coffee oil been used as a source. Interestingly enough, this is a chance for the coffee industry to help save itself as according to a report from Fairtrade Australia & New Zealand, farmers could lose nearly half the suitable land for growing coffee beans if climate change isn’t addressed by 2050.

Even though the city of London hasn’t given a formal agreement to keep using bio-bean’s coffee-powered fuel in the future, the company remains optimistic about new markets. The United States in particular has caught the company’s attention as the country, by far, produces the most coffee waste on the planet. On a daily basis, Americans drink roughly 400 million cups. In the meantime, continued cooperation with the city of London isn’t out of the question yet, and bio-bean hopes that if all goes well, the biofuel can someday power as much as a third of the city’s 9,500 buses.