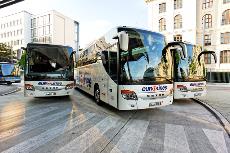 2014 was a good year for the Deutsche Touring Group. – The company that operates under the brand Eurolines Germany, offering bus trips primarily outside of Germany. The coach company announced that together with its subsidiaries in Denmark, Czech Republic, Croatia and Serbia, it was able to generate a slight increase in revenue and a considerable increase in profit for the year. The liberaliza-tion of the bus routes inside of Germany and the increase in demand for international bus trips were the main reasons for the positive results. The increase in popularity and the image of the coach sector also helped to entice more travelers to take the bus. The positive environmental impact of long-distance coaches, which was confirmed among others by organizations like the Technical Inspection and Federal Environment Agency of Germany, convinced many customers to use their services, too. The continuous investment in purchasing modern new coaches and their “Business Class” concept were in the opinion of the company, both key factors in the success of Eurolines Germany. Simulta-neously, the company continues to form additional strategic partnerships to expand the offering of European wide coach routes and improve quality.

„We are optimistic about 2015, even with the increased competition in our key international markets” stated Frank Zehle, the Managing Director of the Deutschen Touring GmbH/ Eurolines Deutsche Touring Germany. He does not see the fusion of FlixBus and MeinFernbus as the only challenge for Eurolines, but also the continued expansion plans of additional German and international competitors in the market. Zehle believes new regulations are the biggest hurdle. Starting in 2016, the legislator states that it is required to have handicap accessible buses for all of the long distance coach carriers. He also criticized the poor infrastructure at the central bus stations. The Deutsche Touring leads by example and manages since September 2014 the new central bus station in Hannover. It is planning to expand this into additional cities.

„2015 will surely be an exciting year and I am looking forward to it“, commented Zehle. “We will continue striving to reach our goals through expansion, quality at an inexpensive price, strong partnership in the Eurolines alliance and a strong sales effort. Therefore we are continuously investing in quality and customer service to not only protect our leading international market share but also to increase it.”