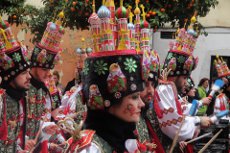 Living on a secluded island, every year the Brits miss out on one of Europe’s biggest parties: Carnival. In countries such as Germany this time of the year is commonly known as the “fifth season”, allowing society to be turned topsy-turvy for a few days, when fools and jesters seize power. During big parades tons of sweets and thousands of little flower bouquets are rained down on the spectators in their fancy dress costumes. A good pinch of social critique must not be missing either, as famous politicians are usually the subject of satirical speeches and ironic caricatures. Germany’s carnival stronghold par excellence is Cologne: From 5 to 9 February the city is turned into one big party.

The carnival festivities traditionally precede Lent and the loud celebrations were originally meant to fend off the ghosts of winter and to make space for spring. During the middle ages, however, carnival became a more and more socially inscribed act of displaying the power of the people to the authorities. This provided a basis for the social critique that is deeply embedded in most of Europe’s present-day carnival parades and parties. One of the most intriguing features of carnival is that every city has its very unique traditions.

The Most Outstanding Carnival Traditions 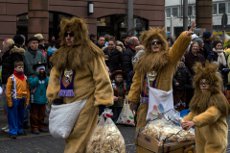 Thanks to the offers of low-cost coach companies, the British can join the continent’s festivities for little money. A bus trip from London to Cologne with megabus, for instance, can be booked starting at £26. When you’re on the continent anyway, you should make the most of your trip and take a detour to some other carnival celebrations. A coach journey from Cologne to Venice, for example, can be booked starting at £32. You can also make use of Paris as a transport hub on your vacation: Tickets for a trip from London to Paris are available from £10. Once arrived in the French capital you can continue your bus trip to carnival centres such as Dunkerque, Nice or Turin without breaking the bank.