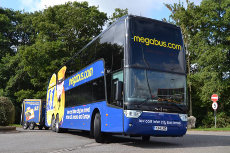 As of 1 July, the German coach company FlixBus will

FlixBus: From Start-Up to Market Leader

The huge success of the company FlixBus is a result of the deregulation of the German intercity bus market in early 2013. Individual coach companies were vying for customers by offering inexpensive tickets and top notch comfort features such as free WiFi and entertainment options on the coach. Whilst other companies – including the National Express subsidiary city2city – had to give in to the pressure, FlixBus managed to assert itself. In early 2015, FlixBus merged with MeinFernbus – its biggest competitor back then – and has held more than 65 per cent of the German market share ever since.

FlixBus is currently active in 19 countries and offers about 100.000 connections per day. While the acquisition of megabus’ retail branch strengthens the company’s position in Western Europe, the company is simultaneously working towards the expansion of its portfolio in Central and Eastern Europe. Thanks to a cooperation with the Polish coach company PolskiBus, German travellers can already choose from a larger number of holiday destinations in Poland. Starting this week, FlixBus will furthermore launch connections to Romania and Croatia. In the latter, the company is about to establish a close-knit national network, as it has already done in France and Italy.