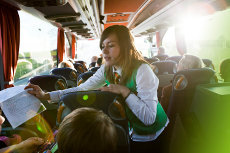 When travelling within their own country, the French are still reliant on cars or on national railway services. Low-cost intercity buses, which have been a familiar sight on British motorways for years, have until recently been pie in the sky for the citizens of the Grande Nation. However, this is about to change: Due to the “Loi Macron” – a bill designed by the French Minister of Economy, Emmanuel Macron – the first French intercity buses might tour the country’s roads in the foreseeable future. For now, links between two French cities are only allowed in the context of cabotage, meaning that the connection must be part of cross-border routes. In addition, more than half of the passengers on the bus must demonstrably travel abroad. This exception regulation has been made use of by the British intercity bus provider megabus. In February, it inaugurated a connection between Paris and Toulouse, which is part of its line from London to Barcelona. The compelling offer, which is available from 8 Euros, is regarded a forerunner of the Macron Law.

In recent months, Macron and his agenda of liberalisation had to face several obstacles. In order to pass the bill despite a lack of votes, the government in France in fact risked a vote of no-confidence, which was rebuffed in its favour in mid-February. This finally paved the way for the opening of the French market for intercity bus journeys. Apart from megabus, German intercity bus providers are amongst the first to explore French territory: The recently merged bus company MeinFernbus FlixBus has already installed a connection to Paris. Meanwhile, Postbus services a bus stop in Strasbourg. In the context of their expansion, German intercity bus providers might become a severe competition for the French bus company iDBUS, a subsidiary of the national railway SNCF. This, by implication, is likely to lead to cheaper fares.

Current numbers prove that a liberalisation of the French intercity bus market is called for by travellers. In 2013, about 30 million Britons and 32 million Spaniards travelled by intercity bus. In contrast, only 110,000 French made use of buses for longer journeys. In 2013, the first year after its market’s liberalisation, about eight million Germans took the intercity bus. Only one year later passenger numbers rose to about 20 million. For 2015, a further rise in numbers is expected. The lack of intercity bus passengers in France can only be ascribed to the lack of appropriate offers since the prices for bus journeys are not more expensive than in the rest of Europe, as a study by the Fédération des Transports de Voyageurs suggests. A kilometer by intercity bus costs about 6,90 cents, whereas passengers on intercity trains have to pay about 9,11 cents for the same distance. Passengers travelling by TGV are faced with the highest prices: a kilometer by high-speed train amounts to 10,98 cents.

Low-cost journeys to international metropolises or within one’s own country are the main benefit of an intercity bus system and France’s planned liberalisation of its market is yet another step towards the installation of a European intercity bus network, which will allow for cheap and comfortable journeys through all of Europe.