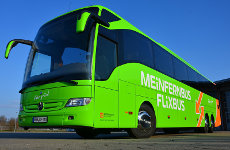 As part of its expansion strategy, the recently merged German intercity bus company MeinFernbus FlixBus is currently setting up numerous new international bus connections. Many new routes will be implemented on March 26th. Starting then, intercity buses will run from Cologne to Paris and Brussels four times a day. Ticket prices for a journey to the Belgian capital Brussels start at 15 euros. Inhabitants of the Ruhr district will profit from inexpensive bus fares to Paris: The cheapest ticket for a journey from Duisburg to Paris can be purchased for 29 euros. In the meantime, MeinFernbus FlixBus also improves its bus routes to Amsterdam. While more buses will be operating on the existing connections between Cologne and the Dutch capital, a new route from Nuremberg to Amsterdam will be implemented on April 26th, which allows for direct journeys from Franconia to the Netherlands. A further addition to the already available destinations from Nuremberg will be the Czech city Plzen – this year’s European Capital of Culture. The connection between the Franconian university city Erlangen and the Czech capital Prague completes MeinFernbus FlixBus’s new international bus lines. However, the recently merged company is not the only bus provider who casts an eye at international endeavours. Postbus has recently announced a massive increase in travel destinations including bus stops in Poland and the Baltic states.

Although the German intercity bus market offers an ever-increasing number of international connections, it is simultaneously growing denser within the confines of its own borders. For instance, starting in May Postbus will be servicing new bus stops in German tourist regions such as Lusatia, the island Usedom and spa towns at the Baltic Sea like Kühlungsborn and Bansin. In addition, MeinFernbus considers a bus stop in the Lower Bavarian city Straubing. In this case, it was not the intercity bus company itself that came up with the idea but the city’s own municipality. In order to become more attractive for tourists while also offering its citizens cheap travelling alternatives, the city administration suggested the integration of Straubing into the existing route leading from Passau to Berlin. Other cities such as the Bavarian city Neumarkt follow suit and actively approach bus companies, in order to become part of their networks. This proves that the German intercity bus market has not reached its full potential yet but is still thriving. As a result, the established bus network will continue growing on a national as well as international scale.