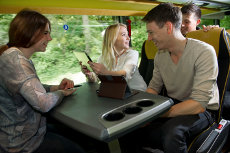 While coaches are a familiar sight on the UK’s motorways, other European nations such as Germany and France have only recently liberalised the market for intercity bus transport. In Great Britain, horse-drawn stagecoaches had been in use between the 1500s and the 1830s and 1840s, when the invention and success of the railway threatened to render them obsolete. However, the operators of horse-drawn coaches did not stand back and instead purchased the first motor coaches in the early 1900s. The first scheduled coach service was launched in 1925 and connected the cities London and Bristol.

In the 1920s the young industry benefited from a big boost as numerous independent companies entered the market. London and Oxford, for instance, were connected by no less than 18 coach operators by 1930. However, in the same year the Road Traffic Act was passed which introduced a number of regulations and restrictions, including a speed limit. This constituted a first obstacle to the popularity of the UK bus industry. Later, during WWII, the British coach market was effectively out of order, as all services had to be suspended in order to save fuel.

The 1950s and 60s constituted prosperous times for the bus industry: only few people could afford cars and the out-dated speed limit was loosened. However, large part of the coach industry was nationalised in these decades. In 1972, National Travel was founded: The company cooperated with smaller bus providers which were allowed to keep up their scheduled services. They only had to adopt National Travel’s logo, which was soon to be rebranded as National Express.

The Transport Act of 1980 finally deregulated the UK coach market, which led to the launch of many independent coach companies and an increasing number of coach connections. While many of the newly founded transport operators had to surrender to National Express, some others stimulated competition. The launch of megabus in 2003, in particular, led to a nationwide crumbling of prices, from which customers can still benefit. Even nowadays – more than 30 years after the deregulation of the coach market – companies frequently offer special deals and attractive discounts, which is one of the many reasons – besides convenience, comfort and eco-friendliness – for taking the bus.