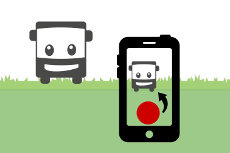 Whenever you see a group of people walking down the street nowadays, staring at their smartphones and spontaneously changing directions, then the chances are good that they’re either lost or simply a bunch of Pokémon trainers. The free app “Pokémon Go” takes the 1990s game classic to a new level by making use of augmented reality. Everywhere you are, a Pokémon might pop up and you can then catch it in your actual surroundings, which leads to entertaining screenshots and a lot of fun. What distinguishes Pokémon Go from more traditional computer games is that the app actually makes you want to go outside. The more interesting and diverse spots you visit and the more you travel by foot or bike, the faster you can fill your Pokédex with rare and exciting little monsters.

The more you travel, the better your Pokémon!

You never know where the next Pokémon will show up. But the spots for them to appear are not as random as one might think. For instance, if you’re close to a river or the sea, then more water-type Pokémon will show up. Rumour also has it that there’s some strong Pokémon such as Mankey and Machoke hanging out at gyms and football stadiums. In more rural areas, on the other hand, you’re likely to encounter insect species such as Caterpies and Weedles. Stone Pokémon tend to hang out at larger streets, while electro Pokémon seem to feel at home in industrial areas. No matter where you live: The more you travel, the more diverse your Pokédex!

Tip: If you’re a Pokémon trainer and you’re starting to get fed up with the usual Pidgeys and Rattatas that you encounter in the streets of London, then a change of scenery might be just what you need. You can hop on a bus from London to Brighton, for instance. The connection is operated by National Express and Eurolines UK with ticket prices starting at £5.10. Within 1 hour and 50 minutes, you can be at the seaside! So grab your friends, find a nice spot on Brighton Pier to activate a lure module and wait for all those rare water Pokémon to pop up.

The Lazy Trainer’s Guide to Pokémon Go: Why not hunt Pokémon on a bus? 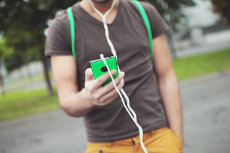 The aim of Pokémon Go is to make players go outside: The more you travel, the more diverse your Pokémon and the further you walk, the better the Pokémon that comes out of an egg. However, there’s a kind of hack: Why not catch Pokémon on a bus? If you sit on a bus and the bus goes really slowly, then the app actually makes the distance count and your eggs will hatch sooner. With the average speed of traffic in central London being 7.4 miles per hour, you’re likely to hatch a few eggs on the road. Another advantage, that goes hand in hand with this, is that you’ll pass many Pokéstops. You can easily visit them while comfortably sitting on a bus and get cool items as well as XP, which makes you level up faster. Obviously you’re also likely to meet Pokémon – on the bus itself as well as on bus stops. It’s basically like being on a safari! The bigger coach station are usually Pokéstops and if you’re lucky someone has already activated a lure so that all the good Pokémon come to you while you wait for your bus. Even if your service is delayed, it doesn’t really matter: A rare Jinx makes up for the wait, no?

And obviously there’s one major advantage of playing Pokémon Go on a coach: There’s usually plenty of electric sockets and often you can also access free WiFi (such as on megabus, FlixBus and selected National Express services). The fun you can have with Pokémon Go is virtually endless* if your phone is constantly plugged in and you can use free WiFi.

*As long as the servers don’t crash, that is…