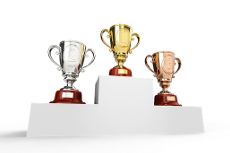 Since 2008, the UK Coach Awards have been held each year to celebrate the country’s coaches and buses and award the industry’s best in a variety of categories. These range from coach operations to awards for individual people in the industry, including the best coach staff, engineer of the year and the top UK bus driver. This past year, National Express received top marks for its ground-breaking technology, winning the gold prize for innovation as well as a silver prize for innovation in road safety.

The ceremony, held this year at the Piccadilly Hotel in Manchester, is completely independent with the sole purpose of promoting and celebrating the UK coach industry. It is the only awards scheme that is solely centered around coach operators and the people who work for them. There are numerous categories of awards, and each nomination is assessed by a panel of independent judges, who evaluate finalists based on published criteria rather than personal interests. Finalists and winners can enjoy PR and marketing support by being featured on the UK Coach Awards widely read website and media channels.

The VUER System Takes the Gold

One of the most ambitious awards at the ceremony, the innovation award is reserved for the most original idea that best improves the coach industry and/or passenger experience. Perhaps for the first time since the inception of the UK Bus Awards, judges were completely won over when National Express showcased its VUER (View, Unwind, Enjoy, Relax) onboard infotainment app. The app allows passengers to access a large selection of films, television series and up to £20 of magazine content on any of the National Express coaches. Children can particularly enjoy a wide range of content since National Express partnered with Turner Broadcasting. The system works through a fitted hardware unit on each of the coaches, which allows pre-downloaded content to be shared over wi-fi to passengers’ mobile devices with the app in place.

The ROSCO Award for Innovation in Road Safety

Safety always matters, and the UK Coach Awards honours providers that work to make coaches and local buses as safe as possible. The ROSCO Award for Innovation in Road Safety awards the company that creates the best improvements to make driving safer with evidence and sustainable results to back up the success. This year, National Express won a silver award for its Lytx DriveCam, a CCTV system that records both the driver and the road should anything serious happen. The system will record and send a 12 second video clip to its relevant response team to view so that they can react appropriately and in a timely manner.

The camera holds the driver to a higher level of accountability but also praises the swift decisions or actions that they might need to take to avoid an accident on the road. The system also allows drivers to spot any potential issues in the terrain or on the road, which also encourages highway authorities to fix these problems sooner if needed. Both passengers and customers can have peace of mind with the extra set of eyes that the camera system provides.

Paving the Way for the Future of Coaches

Another highlight of the event is that National Express unveiled its New Caetano Levante III model, which recently made its debut at the NEC in Birmingham. The new coach model will be incorporating both innovations in addition to its optimised structure, heating system and ease of control for drivers. With each innovation, National Express is constantly working to raise the bar and will continue to be one of the leading providers in the industry.