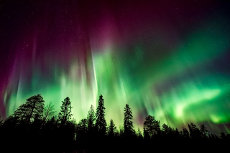 As emerald lights dance across the world’s northern skies, many cold and distant places spring to mind, from Alaska to Siberia and the northern most tips of Scandinavian countries. While these are all well-known sites to view the Northern Lights, the phenomenon can also be seen in both Ireland and Scotland. As January approaches, so does the most opportune moment to view the Aurora Borealis.

The Best Time to See the Aurora Borealis

While it’s impossible to say when exactly the best moment to visit one of these places is, it can be calculated that between January and March is the ideal time due to the longer nights in the northern hemisphere. It can also be noted that the appearance of the lights is in direct correlation with the ‘solar maximum’ which is a phase of high activity in solar flares and runs on an eleven year cycle. Typically, the Northern Lights are active for up to three years after this period. Since the last solar maximum was in 2014, this year may be the last one in a while to have a good chance of seeing the lights!

Infamous for its foggy, rainy and cloudy weather, Scotland may not seem like the most ideal option to spot the Northern Lights, however the area is no stranger to both clear nights and the lights themselves. The northern country is home to a few well-known spots where the lights have been spotted, and is a convenient location for people to travel to from England or Wales.

One of the best viewing places is the far northern Coast of Caithness as well as the remote Isle of Skye, Aberdeen, Dunnet Head and the Northern Highlands. This past February proved to be particularly successful for people looking to see the lights. If the weather conditions align just right, it’s possible to see the whimsical “Mirrie Dancers,” a mesmerizing aurora of flowing light. The phenomenon can be seen throughout Scotland provided that light pollution is at a minimum, however there are several ideal places for viewing, including: Shetland, Aberdeenshire, the Cairngorms, Galloway Forest Park, the Angus Coastal route, Fife and Calton Hill in Edinburgh.

Scotland is easily accessible from either Edinburgh or Glasgow, its two largest and most populous cities. There are coach connections to either one of them throughout the United Kingdom as well as numerous international flights. Scotland boasts an excellent public transport system, with buses and trains that reach some of the remote viewing areas along the northern coast. Leading bus provders include National Express and megabus. Even if you miss the lights, the region has some of the most spectacular views around.

The Northern Lights in Ireland

How far south an Aurora can be found is in direct correlation to the strength of the solar wind, which makes it possible to predict the type of light display that will take place and where in the Irish sky it will sit. Typically, they can be seen on the northern horizon, but on some occasions, the lights can be found directly overhead as if one were in the North Pole itself.

The best place to view the lights, is in the Republic of Ireland’s northern most point, County Donegal’s Malin Head. The area has been known to be the site of impressive displays in the past, though last year, the lights could be seen as far south as County Cork. The nearby town of Inishowen is the perfect place to stay for light hunters, with a traditional bed and breakfast. The town itself puts out very little light pollution so is a suitable viewing spot in its own right without having to go out and brave the cold northern winds as well as the towns of Lough Foyle and Moville. In Northern Ireland, recently considered one of the World’s Best Regions for Travel: Belfast and the Causeway Coastal Route is not only a fantastic tourist destination, but also a known spot to view the Aurora Borealis.

Similarly, to Scotland, Ireland is also easily accessible from its largest cities, Dublin, the capital of the Republic, as well as Northern Ireland’s capital, Belfast. Ireland also offers an excellent and thorough public transport system, and even offers regional meeting points in Donegal Airport for international travelers as well as Derry-Londonderry Airport in Northern Ireland. Popular bus operators in Ireland include Aircoach and Bus Éireann.