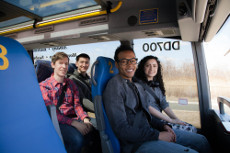 Taking the coach is a very eco-friendly way of travelling between cities. According to calculations of the government initiative Act on CO2, a traveller on a coach with an average amount of passengers on board will only produce 4.8 kg of emissions per 100 kilometres. In comparison, a single passenger in a large car causes about 41.4 kg of CO2 on the same route. However, coach providers work hard to further reduce emissions and constantly try to come up with new kinds of fuel. One of the latest inventions in this field of research is the so-called “poo bus”: The intercity bus designed by the recycling and renewable energy company GENeco does not use traditional petrol but instead runs on human and food waste.

The “poo bus” is officially called Bio-Bus and was introduced to UK streets in January. In order to drive the bus, waste is transformed into gas – a process that is achieved in a state-of-the-art plant built by GENeco. The Bio-Bus runs on biomethane, which causes less emissions than traditional diesel engines. Furthermore, it is only about half the price of diesel and thus not only an eco-friendly but also an inexpensive way of conveying passengers from A to B.

GENeco’s Bio-Bus initially provided direct connections from Bristol Airport to a bus stop in Bath city centre. Since last January the coach has also been in use in Bristol. This is not a coincidence as the South English city has been chosen as this year’s Green Capital by the European Commission. Tourists as well as Bristolians, who are interested in taking the Bio-Bus, will not have difficulties distinguishing it from common buses: GENeco decided to advertise the coach’s unconventional mode of fuel openly by adorning the vehicle with tongue-in-cheek illustrations of people in the loo.

Whether major intercity bus providers such as megabus or National Express will make use of biomethane in the future as well, remains to be seen. However, inventions such as GENeco’s show that travelling by bus can be made even more environmentally friendly than it already is.