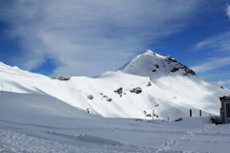 A skiing holiday is fun for the whole family, no matter whether you prefer snowboarding, actual skiing or whether you’re just there for some nice walks through a winter wonderland. Winter holidays, however, can be a bit expensive, which is why it’s a good idea to look for budget travel options. This year, the French coach company OUIBUS offers affordable connections from London to some of the most popular ski resorts in the French Alps. Here’s all the deets!

Taking a coach to the French Alps

What’s best about the current OUIBUS offer is that you can also take your own equipment. Every passenger may take a pair of skis or a snowboard as well as a pair of boots. Make sure though that your skis are stored in appropriate protective covers and that they have your full name, address and phone number on them.

Another big advantage of the OUIBUS connections is that some of the routes are operated as overnight services. This means that you can hop on the bus at London Victoria Coach Station in the late afternoon and simply spend the whole journey sleeping. In case you can’t sleep, there’s free WiFi on board as well, which provides for good entertainment. The coach will then drop you off right at the entrance to the resort of your choice – no shuttle buses needed!

From London to Val Thorens

Located at 2,300 metres altitude, Val Thorens is regarded as the highest ski resort in Europe. This is also the reason why skiing at Val Thorens is possible for several months, in general until early May. The community of Val Thornes is part of the 3 vallées ski area, which is the world’s largest ski area offering more than 600 kilometres of piste. If you opt for a trip to Val Thorens, you should get a one-week ski pass. This entitles you to also discover the nearby resorts Paradiski and Espace Killy at Val d’Isère – one of the sites of the FIS Alpine Ski World Cup.

Bus from London to Lyons, from £41

Bus from Lyons to Saint-Martin-de-Belleville – Val Thornes, from £13.25

From London to Bourg-Saint-Maurice

Bourg-Saint-Maurice is also located in the French Alps and is part of the Paradiski ski area. All in all, fans of winter sports have about 425 kilometres of piste to discover. Just like Val Thorens, Bourg-Saint-Maurice is located fairly high up and also features two glaciers, which makes skiing possible until late spring. One of the highlights of the ski resort is the speed piste of Les Arces – the current record stands at 240 km/h. If this is not enough for you, then you can also take a trip to the Olympic bobsleigh run and give it a little try.

Bus from London to Bourg-Saint-Maurice, from £67