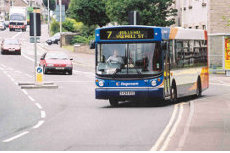 One of the UK’s largest transport groups, Stagecoach, will be giving the UK’s first full-sized driverless bus a test trial later this year. Similar passenger test trials have already been conducted on small driverless vehicles in France, and China has already been testing larger driverless buses on Shenzhen roads. Stagecoach claims that their bus will be capable of parking in depots and drive to refueling and wash points on its own. The company is investing in this technology with the belief that with more self-driving buses in operation, there is the potential to make transportation safer and more efficient.

Getting the UK onboard an Autonomous Future

To make this vision a reality, Stagecoach partnered with bus manufacturing company, Alexander Dennis Limited (ADL) as well as the technology firm, Fusion Processing. The team is moving forward with plans to adapt the project with technology used in the driverless pod trials which were conducted in Greenwich last April. This trial involved a driverless version of a pod vehicle, which are used at Heathrow’s Terminal 5, and was equipped with £20,000 worth of autonomous technology. The trial’s next stage will take place as early as next year and let the vehicle take over on certain road, but with a driver present to retake control when necessary.

Integral to the bus’s success is the implementation of a complex system of sensors, which include radar, laser, camera and ultrasound technology as well as a satellite navigation system that detects and avoids objects while planning routes. This technology optimizes safety by accounting for blind spots and is hyper vigilant to sudden changes on the road, including cyclists and wayward pedestrians. The buses will be used in depots without a driver for parking, fueling and washing. While off public roads, a driver will also not be required for the bus to run. Despite the legal restrictions that currently prohibit the vehicle from operating without a driver while passengers are on board, Stagecoach is optimistic that the technology will be used more on a wider scale. The laws could change as the technology improves. Sam Greer, the engineering director at Stagecoach, said: “Stagecoach has long been at the heart of innovation within the bus industry and this is an exciting trial that will deliver the UK’s first fully autonomous single deck bus.“

While many people might be concerned about their safety when considering driverless vehicles, this is in fact one of the key motivators behind the technology. As a part of its testing, GATEway (Greenwich Automated Transport Environment) is monitoring how people react to autonomous vehicles and whether general perceptions change as the technology continues to be implemented. According to the World Health Organization, an estimated 1.25 million people lose their lives on the road each year, and various studies, including those by the US Department of Transportation, have found that approximately 90-95% of car crashes are a result of human error. Greer believes that these buses have the potential to help improve safety on the road and transform future bus travel.