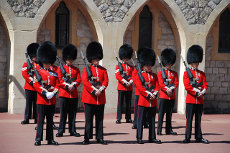 One could say that last week was one of the most British weeks ever: Not only was it the Queen’s 90th birthday but also the 400th anniversary of the death of William Shakespeare, England’s national poet. (It can’t be coincidence that this important day correlated with the English National Holiday, St. George’s Day.) In order to celebrate Englishness, the editors at CheckMyBus have compiled the Ultimate English Coach Tour, which will allow you to experience all facets of English culture, from royalty over music to the bard himself.

Our ultimate English Coach Tour starts and ends in London. This means that no matter where you live in the world, you can always find many available cross-border bus travel options to reach the UK’s capital. The German coach company FlixBus has only recently started many inexpensive connections to London from cities in Germany and France. A ticket for a bus trip from Paris to London, for instance, can be booked for £9. Once you hopped off your coach in London, you can start the ultimate English Coach Tour right away, which will take you to Oxford, Stratford-upon-Avon and Liverpool. If you manage to get the cheapest coach tickets, then the whole tour will cost you less than £40.

If you want to discover English culture, it’s best to start in the country’s capital. Located in the heart of London is Buckingham Palace, the residence of the Queen. While most visitors are happy witnessing the Changing of the Guard, which takes place daily from April until June at 11:30, you should also see the impressive inside of Buckingham Palace. The State Rooms can be visited from the end of July until the beginning of October and if you’re lucky one of the special exhibitions is on. This summer, for instance, you have the unique chance to take a look at some of the most distinctive dresses worn by the Queen during her long reign. 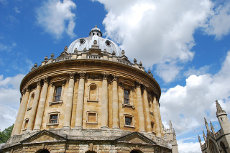 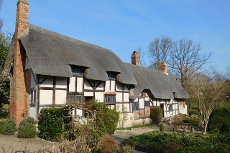 This year marks the 400th anniversary of the death of England’s national poet, William Shakespeare. While numerous events and special performances take place all over the UK, the most exciting ones can be witnessed in Shakespeare’s hometown Stratford-upon-Avon. You have the possibility to wander the streets of Stratford and to visits the bard’s birthplace as well as New Place, the impressive home he acquired after retired from the stage. The Royal Shakespeare Company (RSC), which features famous Shakespearian actors such as Ian McKellen, Judi Dench and David Tennant, owns a theatre in Stratford-upon-Avon, so make sure to catch a play there!

Stop 4: The Home of Britain’s Most Famous Boyband – The Beatles’ Liverpool 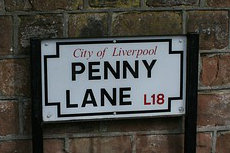 Although the UK can boast itself of numerous famous bands such as the Rolling Stones, Radiohead, Oasis and the Spice Girls, the most characteristically “British” one will probably always be the Beatles. On any England-themed trip, visiting Liverpool is a must. You can take part in the Beatles Walking Tour and visit the birthplaces of some of the band’s members or St. Peter’s Church Hall, where John Lennon first met Paul McCartney. In the evening, make sure to take a trip to Cavern Club, where the Beatles used to perform on a regular basis in the early stages of their career. 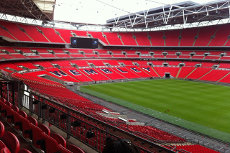 There is hardly anything more prototypically British than football and there’s hardly any venue as impressive as Wembley stadium. The arena offers space for about 90,000 spectators and is not only used for big football competitions such as the Champions League but also for rugby matches or concerts. When you get back from your English Coach Tour than the last thing on your agenda should be getting a ticket for a football match at Wembley, the home of football.