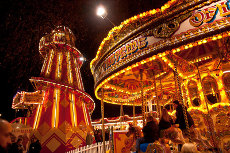 When the cities glisten with lights and the smell of roasted nuts and gingerbread fills the air, then it’s a clear indicator that the festive season has finally kicked in. Numerous British towns and cities celebrate the time before the holidays with charming Christmas Markets and attract visitors with mulled wine, spicy delicacies and Christmas cheer. Reason enough to take a look at the most festive Christmas Markets in the UK!

Most of the UK’s Christmas Market can easily be reached by bus. Checking and comparing the offers of different bus providers allows you to save money by sealing the best deal for your coach trip to London, Birmingham and Co.

12 November – 22 December 2015
Visitors looking for a traditional Christmas Market will find the Birmingham one the place to be. The city’s market stands in the tradition of German Christmas Markets, which have been in existence for centuries. When taking a stroll around Birmingham’s Frankfurt Christmas Market, visitors can try the best German cuisine has to offer: from bratwurst over brezels to burnt punch – everything is available in Birmingham. Simply utter the magic words “Noch einen Glühwein bitte!” and your next steamy cup of mulled wine will be presented to you. 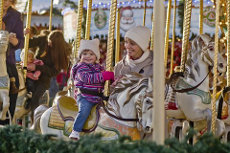 As the name already suggest, Edinburgh’s Christmas is more than a simple market. Apart from the traditional wooden chalets, you will also find numerous attractions that transform the city into a Christmas themed funfair: a Christmas tree maze, the Princes Street Gardens Ice Rink and Santa’s Grotto are only few of the things to see in the Scottish capital. One of the highlights of Edinburgh’s Christmas is the Santa Fun Run & Walk, a charity run in which hundreds of Santas collect money for a good cause.

The Scenic One: Winchester Christmas Market

20 November – 24 December
Naturally, the UK’s capital also prides itself of a Christmas Market – but not just one, several! One of the most popular ones is the Winter Wonderland in Hyde Park. Here you can find ice sculptures, an ice bar, a Bavarian village serving traditional German food and much more. If you fancy less attractions and prefer a quieter, more traditional Christmas Market, then you should visit the Southbank Winter Market. Stroll along the Thames and enjoy London in all of its pre-Christmas glory.