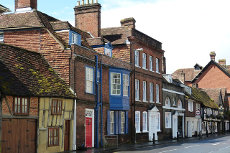 The UK prides itself of numerous attractive cities, which are popular with visitors from all over the world. However, the country also features a variety of smaller market towns, which are also worth a visit. Small traditional pubs and inns, picturesque surroundings and medieval buildings are what these towns are famous and well-loved for.

National Express: Ross-on-Wye is the UK’s most popular market town

The coach company National Express promotes domestic tourism and regularly conducts studies in order to find the UK’s hidden gems. A survey, in which 1,000 coach travellers were asked for their opinion, came to the result that Ross-on-Wye is top of the list when it comes to the most beautiful market towns in Great Britain.

Ross-on-Wye is a market town in Herefordshire, England, and the home of nearly 10,000 inhabitants. The town can be seen as the birthplace of the English tourism sector: In the late 18th century, private boat tours and the first illustrated tourist guide made Ross-on-Wye famous. It was particularly known for its picturesque quality which is well preserved and still attracts thousands of tourists every year.

About 5,000 people live in Thirsk, a small market town in North Yorkshire. The history of the town goes back thousands of years with archaeologists assuming that the original settlement had already been here in 500-600 BC. It is not only the town of Thirsk itself which is well-loved by tourists, but also its surroundings. Thirsk is located close to two national parks: North York Moors and the Yorkshire Dales.

Grantham in Lincolnshire is famous for many things: not only is the market town the birthplace of former PM Margaret Thatcher but also the place where Sir Isaac Newton went to school. One of the town’s main attractions is the Angel and Royal, one of the oldest hotels in the world. It was originally used as a hostel for the Knights Templar and was opened in the early 13th century. Many kings have stopped by here, including Richard III. Another interesting and unique feature of Grantham is the living pub sign: instead of using a normal sign, The Beehive has an actual living beehive outside the pub, which has been there since 1830.

Bedford is the county town of Bedfordshire and home to about 82,000 inhabitants. It originally served as a market town in the Middle Ages and its important role back then was symbolized by Bedford Castle, which was built by Henry I and later fully destroyed. The town is located on the River Great Ouse and it was the place, where John Bunyan wrote the famous novel “The Pilgrim’s Progress”.

The town of Shepton Mallet is the home of about 10,000 inhabitants and is located in Somerset. During the Middle Ages, the town was an important centre for wool trade. This changed and in the 19th century, brewing and the production of cider became the most important industries in Shepton Mallet. The Anglo-Bavarian Brewery is one of the most well-known remnants of this age. Shepton Mallet is the town closest to where the annual Glastonbury Festival takes place.