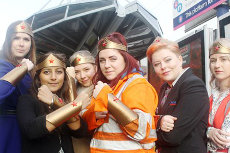 For the last 75 years, Wonder Woman has inspired young girls and women from all over the world. The DC comic book heroine filled a void in the otherwise male-dominated comic sphere, which is why the United Nations have decided to celebrate the iconic role-model by honouring her with a day of her own.

On 21 October the UN celebrated the first Wonder Woman Day and companies from all over the world chime in to honour their very own wonder women. One of these companies is the British coach operator National Express. The company is actively trying to bring more women into the transport industry and to encourage young girls that there is no such thing as a “man’s job”. National Express West Midlands and the Midlands Metro have recently taken on nine apprentice engineers, two of which are women. One of them is Amy Manning from Kings Norton, who explains the advantages of jobs in the transport industry: “It’s a really interesting time to be a bus engineer – there’s so much new technology to explore as the vehicles get greener. The old diesel engines are gradually being replaced by things like hybrids and fully electric buses.”

Another of National Express’s wonder women is Stephanie Maher, who joined the company in 2011 as a graduate trainee. After only five years with National Express, she already manages more than 500 staff and nearly 200 buses at Wolverhampton garage. Maher is doing a great job, which is why she was recently honoured by being shortlisted in the “Young Bus Manager” category at the UK Bus Awards. Apart from managing the garage, she also represents National Express at the Black Country Chamber of Commerce. Maher explains: “Girls often don’t think about following a career in the transport industry. But I’ve found it really rewarding. Every day is different, and I love the people.”