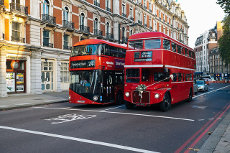 Does the following situation sound familiar? You’re waiting for your bus, which was supposed to arrive five minutes ago. After a few more minutes your bus is finally arriving but instead of one bus there’s two buses right after each other. This situation is not just a daily nuisance but also a scientifically studied phenomenon, which goes by the name “bus bunching”.

CheckMyBus explains: What is bus bunching?

Bus bunching occurs fairly regularly in scheduled networks. Two buses, which were originally scheduled to arrive ten minutes or so apart, basically arrive at the same time, which is a problem for passengers and transport companies alike. Theorists claim that the major problem is that once a bus is only a little bit late, the delay tends to get longer with every stop. The reason for this is that the delayed bus usually picks up more passengers (because people who would have taken the next bus now take the delayed one instead). Simultaneously, the later bus is arriving earlier and earlier because there’s less people to pick up at the bus stops. This will continue until the two buses are eventually head to head. If there’s two buses right behind each other, it is called a “bus bunch” or “banana bus”.

Are there measures to avoid bus bunching

Yes, there are but they will never work perfectly. After all, the phenomenon of bus bunching is embedded in chaos theory and states that you can never anticipate the actual delay of a bus because it is related to random causes.

Nevertheless, transport companies can reduce the effect to some extent. For instance, if the control centre notices that a bus is delayed and that the second one is right behind, the transport company can make the delayed bus a temporary “express service”, meaning that it won’t serve every stop. The problem, however, is that the passengers already on board basically need to be asked before every stop whether someone wants to get off. Another corrective measure is the flexible use of surplus vehicles. Whenever the transport company notices that a bus is delayed and there might be risk of severe bus bunching, it can spontaneously have another bus serve the respective route. This way, there will be less passengers to pick up for the delayed bus and the bus driver has the chance to make up some of the lost time.

The science of bus bunching

Numerous transport companies all over the world have hired scientific experts in order to analyse the problem and to keep it at bay. In 2009, for instance, Transport for London installed a system called iBus, which tracks the exact position of more than 8,000 buses. This way, the control centre as well as the bus drivers themselves can see exactly how close they are to the previous or later bus. Drivers, therefore, have the option to either speed up or to reduce speed to keep the headway as even as possible.

The Georgia Institute of Technology got rid of timetables for good. Instead, an algorithm analyses the headway times and calculates for how long the respective bus has to wait at the initial bus stop before heading after the previous bus. The flexible schedule has shown some good results and passengers report that the overall service is much more reliable. After all, they can rely on the fact that the next bus will arrive in reasonable time (and that there will only be one of them).

Although the term “coach bunching” does not exist officially, the bus bunching phenomenon can also be observed in case of long distance coaches, even though it’s much less common. It is also less related to the amount of passengers getting on. After all, it will take less time anyway since most of the passengers tend to pre-booked a ticket. Instead, it is more related to traffic and to the simple fact that one driver might be a bit faster than the other one. Sometimes it’s as simple as that!