UEFA Euro 2016: Travelling to the Allianz Riviera in Nice 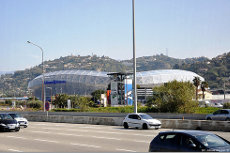 Although the stadium of Nice is officially called the Allianz Riviera, it will feature in the UEFA Euro 2016 as the Stade de Nice due to sponsoring restrictions. While the construction of the football arena was originally meant to be finished in 2007, it was put on hold because of a financial strait. However, when France was elected as the host nation of the Euro 2016, the construction process was picked up again and the stadium was opened in September 2013. It currently serves as the home ground of the local football team OGC Nice and provides space for 35,624 spectators.

One of the main features of the new stadium is its dedication to sustainable development: photovoltaic power plants and a rainwater recovery system make the Allianz Riviera one of the greenest stadiums in France. The UEFA Euro 2016 will be the first international tournament held at the Stade de Nice, with the stadium hosting four matches.

Guide to the Allianz Riviera for Disabled Supporters

The Allianz Riviera in Nice provides for 131 seats for fans with a disability or reduced mobility. Every seat is located next to a seat reserved for accompanying persons. In addition, those with a handicap can make use of 80 parking spaces for the disabled. Spectators with a disability are entitled to the cheapest ticket (category 4) for the Euros, irrespective of where they are seated.

Cheap Bus Connections to the Allianz Riviera in Nice