UEFA Euro 2016: Travelling to the Stade de France in Saint-Denis 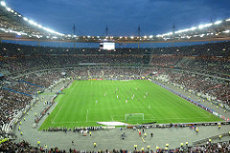 The Stade de France in Saint-Denis, north of Paris, was built for the 1998 FIFA World Cup and is the national stadium of France. The modern, elliptical structure has a capacity of 81,338 seats, with all of them being covered by the stadium’s roof. When the Stade de France was under construction, the Ministry of Sport launched a competition in order to pick the stadium’s future name. Finally, the suggestion brought forward by former French footballer Michel Platini won over those responsible and the stadium was given its current name.

The very first goal in the stadium was scored by French football legend Zinedine Zidane in a match against Spain. As PSG Paris decided to stay in the Parc de Princes, the stadium has no regular club tenant but only the country’s national football and rugby teams. The Stade de France is the only stadium worldwide that has hosted both a football and rugby World Cup final. The last as well as the first game of the UEFA Euro 2016 will be played at the Stade de France with France facing Romania on 10 June 2016.

Guide to the Stade de France for Disabled Supporters

With more than 81,000 seats, the Stade de France in Saint-Denis is the largest football venue in France. It is therefore not surprising that the arena also provides for the largest number of seats reserved for fans with a disability or reduced mobility. All in all, there are 1,000 seats for spectators with a handicap and their accompanying persons, which can be accessed via ramps and elevators. Getting to the Stade de France is not a problem either, since the entire park deck 4 is made up of parking reserved for the handicapped. Fans, who want to see a game during the Euros, can usually pick between 4 different price categories with disabled fans always being entitled to the cheapest ticket, which is a category 4 ticket.