What to do in Glasgow when you’re on a budget 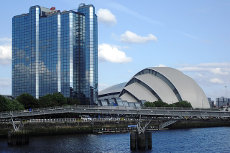 Glasgow is the third largest city in the United Kingdom and offers a vast amount of free activities and events. Apart from museums such as Kelvingrove Art Gallery you can also enjoy the sunshine in one of the city’s parks or explore the Botanical Gardens. If you want to escape the city for a bit, then the surrounding area offers lots to discover such as the Helix in Fife or natural treasures including Loch Lomond, the Highlands or the seaside.

Free Things to Do in the Surrounding Area

Getting to Glasgow by Coach

If you’re not from Glasgow but our guide has made you curious, then you can take your pick from many available bus connections to and from the Scottish metropolis. If you’re smart and you book in advance, then you can even get coach tickets starting from £1 from megabus. Even if you live further away, a long weekend in Glasgow doesn’t have to cost too much money. A ticket from London to Glasgow, for instance, can already be booked from £10 with National Express.

Culture and Arts in Glasgow 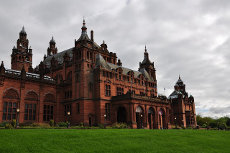 Kelvingrove Art Gallery and Museum is the UK’s most frequently visited museum outside London and that with good reason. The 22 themed galleries house about 8.000 objects ranging from fine arts to natural history. On top of that, the building itself is highly impressive thanks to its mixture of Spanish Baroque style and typically Glaswegian red brick. One of the highlights of the gallery, which is particularly popular with kids, is the Life Gallery in the museum’s west wing. It houses taxidermied animals and places them in their natural surroundings so that kids and adults alike can wander from the Serengeti over the tropical rainforest all the way to Antarctica. 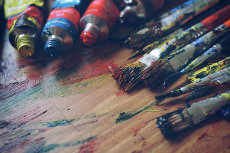 Glasgow’s Gallery of Modern Art (or short GoMA) can be found at Royal Exchange Square in the former townhouse of a rich local Tobacco Lord. The gallery houses famous works of modern art from international painters and Scottish artists alike. Some of the most famous pieces are by David Hockney, Andy Warhol and Niki de Saint Phalle. One of Glasgow’s most iconic pieces of art, however, can be found right in front of the building. While the equestrian statue of the Duke of Wellington is rather unspectacular by itself, the citizens of Glasgow have made it their business to transform it into a very unique piece of art by placing a traffic cone on its head. While it used to be taken away by the authorities, it was constantly replaced by local Glaswegians and has since come to represent the city’s fairly humorous handling of authorities. 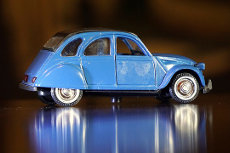 Glasgow’s Riverside Museum has won several awards including the European Museum of the Year Award in 2013. The exhibition, which is located on the banks of the River Clyde, houses about 3.000 objects ranging from vintage cars over skateboards and prams to bicycles. One of the most famous part of the exhibition is the old cobbled street which is lines by shops representing Glasgow’s everyday life between the years 1890 and 1985. Going there is basically like going back in time. Plus, it allows you to explore the city’s past in a very interactive and family-friendly way.

Glasgow Cathedral basically represents the birthplace of the city itself. The building is one of Scotland’s most famous medieval edifices dating back to the 1100s. The cathedral was dedicated to St Kentigern, who is more commonly known as St Mungo. Glasgow Cathedral is one of the few religious buildings which survived the Protestant Reformation nearly intact and is thus certainly worth a visit – especially so since entry is free of charge. When there, don’t forget to look up and take a closer look at the ceiling of Blackadder aisle with its famous stained glass windows.

In the People’s Palace the story of Glasgow and its citizens is told from the 1750s until today. You can see a wide variety of artifacts and digital installations which allow you to travel back in time and to explore the city’s past in an interactive and fun way. For instance, in the “The Single End” exhibition you can find out more about the housing conditions in different decades and see for yourself how little space a family had back then. A more glamourous trip to the past is offered by the “Dancing at the Barrowlands” exhibition: Listen to the music that played and see the outfits people wore to dance the night away at Glasgow’s most famous nightclub. Once you’ve seen everything you can relax at the Winter Gardens and have a little snack surrounded by exotic plants. 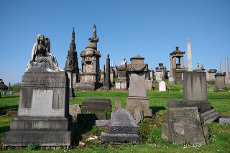 The famous Glaswegian comedian Billy Connolly once said: “Glasgow’s a bit like Nashville, Tennessee: it doesn’t care much for the living, but it really looks after the dead.” Glasgow Necropolis is a huge Victorian cemetery, which attracts thousands of visitors every year due to its intriguing sculptures and memorials. The cemetery opened in 1833 was specifically designed as a place of remembrance that could be visited by everyone. There’s free walking tours available (donations welcome!), which will give you a more detailed insight into the cemetery’s most fascinating sculptures and most interesting stories.

Nature and Leisure in Glasgow 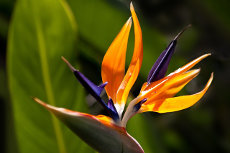 The Botanic Gardens in Glasgow opened in 1817 and have ever since been a popular retreat for Glaswegians and visitors alike. You can take a trip to the Gardens and simply enjoy some sunshine or you can take a closer look at all the flowers and learn a bit more about local and exotic plants. Visiting the Kibble Palace is a must as well: The massive glasshouse features the national collections of tree ferns as well as a wide array of tropical plants. A new addition to the Botanic Gardens are the Tearooms, which are open from April to September and which serve everything from a hearty breakfast to traditional afternoon tea. 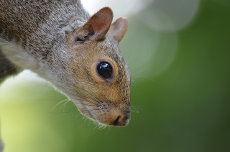 In 2006, Pollok Country Park was voted the best park in Britain. Two years later, it was named the best park in Europe. Reason enough for Glaswegians and visitors alike to enjoy the occasional trip to Pollok Country Park. The estate including Pollok House was privately owned for 700 years before it was gifted to the city of Glasgow and its citizens in 1966. Ever since, the park has provided for recreation and numerous fun activities. It includes a playground, a mountain bike circuit, a wildlife garden as well as one of the most accessible folds of Highland cattle in Scotland. One of the main features of Pollok Country Park is that it combines leisure and culture: You can relax in the sun and should it start raining you can pop into Pollok House and take a look at the vast collection of Spanish Art or have a snack in the tea room.

Free Things to Do in the Surrounding Area 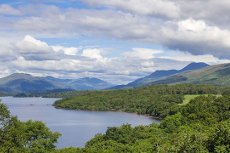 How to get there by train or bus: Get off at Luss, Tarbet or other towns on the bank of Loch Lomond

“Oh, ye’ll tak’ the high road, and I’ll tak’ the low road” – Who doesn’t know the famous Scottish folk song that is dedicated to Loch Lomond, one of the largest lakes in the British Isles. The lake is part of the Loch Lomond and the Trossachs National Park and offers many fun activities ranging from cycling over walking to canoeing. It is located about 23 kilometres north of Glasgow and many of the little towns on the banks of Loch Lomond – such as Luss, for instance – can easily be reached by local bus or train services. Loch Lomond also borders on the West Highland Way, a popular trail which covers about 154 kilometres and is walked by thousands of people every year. It is particularly famous for its picturesque Highland scenery. 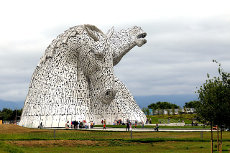 Address: The Kelpies, The Helix, Falkirk, FK2 7ZT
How to get there by bus or train: Falkirk Station
Opening Times: open 24 hours

The Helix is a large greenspace in Falkirk, which offers a wide array of fun activities for families. Thanks to regular bus and train services from Glasgow to Falkirk Bus Station, it is not hard to get there and enjoy a fun day out. You can hire a pedalo boat and explore the lagoon, go canoeing or kayaking or simply allow your kids to have fun at the Splash Play which is right next to the large-scale Adventure Zone. The Helix is also good for any kind of sports, no matter whether you prefer to cycle or run. You can’t really miss the Helix thanks to the Kelpies, which is the world’s largest equine sculpture. The two huge horse heads pay tribute to past times and the work along the canals. You can even take a guided tour of the arts installation and take an exclusive look inside. While entrance in general in free of charge, some fees might apply for certain activities such as canoeing or similar.