UEFA Euro 2016: Travelling to the Parc des Princes in Paris 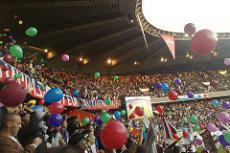 The Parc des Princes, located in the southwest of Paris, was originally a multi-purpose venue and featured a cycling track, which is why the Tour de France used to finish here. Before that, the area on which the current stadium is located, was used as royal hunting grounds – a fact to which the stadium’s name, which translates to “Princes’ Park”, still pays tribute.

Nowadays, the Parc des Princes is mostly known as the home stadium of the football club Paris Saint-Germain and as France’s most famous stadium next to the Stade de France. The Parc des Princes, which can hold 48,712 spectators, is widely regarded as one of the most atmospheric arenas in the world: The avant-garde inspired 1970s construction is said to mimic a washbowl which acoustically enhances the chants of the fans. This has resulted in the press frequently referring to the stadium as “the soundbox”. On particularly thrilling match days, you can even feel the floor ripple under your feet when the crowd is jumping. Five fixtures of the UEFA Euro 2016 will be held at PSG’s home ground.

Guide to the Parc des Princes for Disabled Supporters

The Parc des Princes in Paris provides 44 seats, which are easily accessible and reserved for fans with a disability or reduced mobility. The stadium is also equipped with 44 seats for accompanying persons. During the Euros, tickets can be bought for four different categories with disabled fans always being entitled to the cheapest ticket, which is a category 4 ticket.